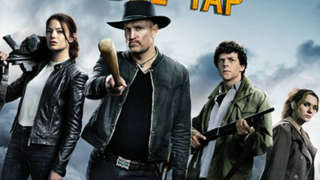 It’s been 10 years since Zombieland first hit the big screen, and the cast from the undead action-comedy is all returning to the apocalyptic wasteland for another round of zombie-slaying. But is this new flick any good?

The reviews for Zombieland: Double Tap are in, and the movie hits theaters on Friday, October 18, and the general consensus is that the movie is funny, but not as entertaining as the first movie. Here’s what the critics thought.

Director Ruben Fleischer and writers Rhett Reese and Paul Wernick got the comedy right, but this time around, they failed to craft a convincing world around it.

Director Ruben Fleischer (Venom) is herding them all toward some kind of ultimate man-vs.-zombie showdown, but the action sequences often feel like the least necessary thing about the movie. For all the flying intestines and skulls that split open like past-due melons, Double Tap has another squishy organ at its center: a big, goofball heart.

Zombieland: Double Tap is a riot, and a lot of that is due to Zoey Deutch and her character, Madison. While it doesn’t quite achieve classic status in its own right, when it comes to sequels that do the original film justice, it is up there. It’s worth the wait, your time, and your money.

It’s often enjoyable, occasionally very funny, and has an energy and verve sorely lacking from Fleischer’s last few films. So, while it’s simply, plainly, not as good as the first movie, Zombieland is no longer the odd one out on Fleischer’s CV.

After 10 years of anticipation, it would have been nice to see a zombie movie with more on its mind than the same goofy undead routine.