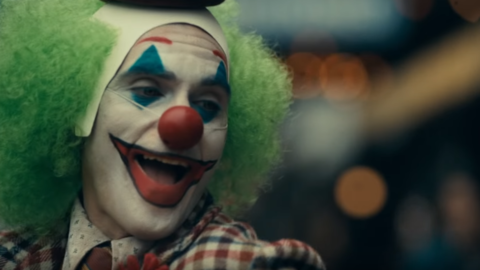 The new comic book movie Joker is one of the most talked-about films of 2019, and it is expected to enjoy a massive opening at the box office around the world.

According to Deadline, Joker–which stars Joaquin Phoenix in the title role–is tracking to make $155 million worldwide for its opening frame. That would make it the second-best October release in the history of movies, only behind 2018’s Venom ($207.4 million).

In the US and Canada alone, Joker is expected to make more than $80 million to surpass venom ($80.25 million) to set a new record for best domestic October opening in cinema history. A previous estimate had Joker making $90 million in the US/Canada for its opening.

Joker was produced on budget of only $55 million, which is significantly below the budgets of other comic book movies. That was by design, as director Todd Phillips pitched Joker as something completely different than the standard comic book movie fare.

Phillips originally pitched Joker as a movie that exists inside a new label of standalone, more character-focused films. If Joker is a commercial success, you can imagine Warner Bros. looking to make more, though nothing is confirmed at this stage.

“The original idea when I went to Warners was not just about one movie but a label, a side-label to DC where you can do these kind of character study, low-rent, low-budget movies where you get a filmmaker to come in and do some deep dive into a character,” Phillips said.

The director added that Joker, and presumably the other movies that would come out of the new DC side-label, would not connect to the wider DC extended universe. That’s why Phoenix’s Joker is not expected to meet up with Robert Pattinson’s Batman.

Joker’s $55 million budget does not include marketing expenses. If you’ve existed in the real world or been on the internet, you have likely seen ads for Joker, suggesting the marketing spend on Joker has been not insignificant. Still, if Joker can make $155 million for its opening weekend that would presumably make it a commercially successful movie.

Joker has found itself in the middle of controversy, including concerns about real-world violence. Speaking at the New York Film Festival on Wednesday, director Todd Phillips said he continues to be surprised by the reaction to Joker. “To me, I thought, ‘Isn’t it a good thing to put real-world implications on violence? Isn’t it a good thing to take away the cartoon element of violence that we’ve become so immune to?'” Phillips said, according to The Hollywood Reporter.

Phillips said he doesn’t agree with how some people are saying he was “irresponsible” to make Joker, a movie that some are saying may inspire real-world violence. In fact, Phillips said, “It seems actually very responsible to make it feel real and make it have weight and implication.”

Filed under:
Next Big Movie Joker