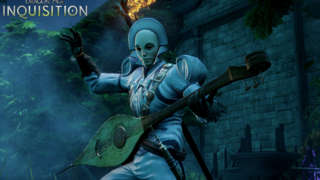 The untitled game will be funded on Kickstarter, though neither a funding target nor other details were not announced. The campaign will go live on October 10 at 5:30 PM PT, timed with Gaider’s appearance at PAX Australia in Melbourne.

We’re super excited to announce Summerfall Studios, a new character and narrative-driven game development studio helmed by @davidgaider and @liamesler! Subscribe on https://t.co/scVLlFN0Dj for a secret sneaky preview of our first game next week… going to Kickstarter next month! pic.twitter.com/x8VlluaXiW

“Helmed by David Gaider and Liam Esler, Summerfall Studios will crush your dreams and tear out your heart… in the very best way,” reads a line from the game’s announcement.

An “exclusive preview” of the new game from Summerfall will be revealed next week ahead of PAX Aus in October.

Gaider will give the keynote address at PAX Aus. His speech is scheduled for 11:30 AM AEST on Friday, October 11, which is when the Kickstarter campaign is expected to go live. Presumably Gaider will dedicated a portion of his speaking time to talking about the new game.

Gaider left BioWare in January 2016 after 17 years with the studio. During his time at BioWare, Gaider worked on Baldur’s Gate 2, Star Wars: Knights of the Old Republic, Neverwinter Nights, Dragon Age: Origins, Dragon Age 2, and Dragon Age: Inquisition. In 2015, Gaider left the Dragon Age team to work on a secret BioWare game that we still don’t know about.