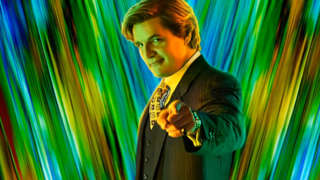 It’s a big day for Wonder Woman 1984. The first trailer for the 2020 movie was revealed to the world, and it had a lot of Steve Trevor in it, who isn’t looking very dead. During Comic-Con Experience Brazil, four character posters were unveiled.

Director of the upcoming June 2020 movie Patty Jenkins helped kick off the event, but before we got to see the trailer, Jenkins gave us our first look at Pedro Pascal as Maxwell Lord. Check out all four of the images from CCXP below.

In addition to Pascal as Lord–who is almost unrecognizable–images for Gal Gadot as Wonder Woman–who has a new costume this time around–Chris Pine as Steve Trevor, and Kristen Wiig as Barbara Minerva/Cheetah were also debuted.

Jenkins explained during the panel that most of the effects in the movie are practical; however, some of the moments with Wiig’s character that needed a little bit of help. However, many of the stunts, locations, and more were practical effects.

Sadly, not much more was revealed about one of the villains in the movie, Lord. Gadot and Jenkins both tip-toed around questions about Pascal’s character during the event. But it’s apparent from the first trailer he’s a media personality who wants power and the means to get it–through some sort of magic crystal.