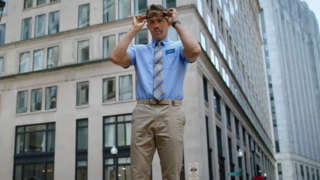 While playing games like GTA V, have you ever wondered what the typical NPC does during the course of its day, amidst the explosions, gunfire, and people driving recklessly? The upcoming July movie Free Guy explores just that. Check out the first trailer for the movie below.

Starring Ryan Reynolds as “Guy,” a bank teller grows tired with his day-to-day life, constantly getting robbed, so he decides to fight back. Very quickly, he realizes he’s actually an NPC in a game, and from there, everything goes off the rails.

Free Guy also stars Lil Rel Howery, Taika Waititi, Jodie Comer, and Britne Oldford. The movie is directed by Shawn Levy, who you may know from his work on the Night at the Museum films, along with a few episodes of Netflix’s Stranger Things.