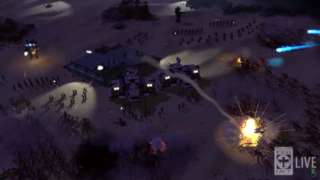 Starship Troopers – Terran Command, An RTS Due In 2020, Announced–Here’s The First Trailer

A new Starship Troopers game is on the way, and it’s an RTS that will pit your human army against the bug-like aliens that franchise fans are so familiar with. A first look gameplay trailer for Starship Troopers – Terran Command has been released, with the game due at some point in 2020. It shows off a short snippet of alpha gameplay, as the human forces are overrun by Arachnid.

There’s also an announcement trailer to enjoy, which captures the pulpy feel of the game. It comes from the creators of the Order of Battle series, and has only been announced for PC.

The game is set in the universe of the Starship Troopers films, which started with Paul Verhoeven’s 1997 satirical sci-fi action movie that spawned multiple sequels. In the game, you’ll fight over different planetary campaigns, and the story and missions you take on will change depending on your choices. Since the Arachnid enemies greatly outnumber you, you’ll need to account for this in your tactics, and use the numerous different units and abilities at your disposal to fight them.

The game is available to wishlist on Steam, where some additional key features are listed: