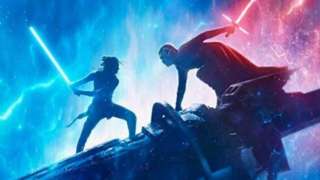 Star Wars: The Rise Of Skywalker Cast On What To Expect From The Saga-Ending Movie

Star Wars Episode IX: The Rise of Skywalker will finally be with us on December 20, and in the lead up to the film’s release many fans are keen for more information about how the nine-film saga will end. We know that some elements of the Star Wars universe are best kept mysterious, and the cast recently teased fans by hinting at their reactions to the ending. Now, thanks to a special aired by Entertainment Weekly on People TV, we have a few more hints about what to expect.

The full special, embedded below, runs for 22 minutes. We’ve rounded up the juiciest highlights from it.

Please use a html5 video capable browser to watch videos.
This video has an invalid file format.
00:00:00
Sorry, but you can’t access this content!

According to Daisy Ridley (Rey), The Rise of Skywalker is “a more, measured, adult approach to the Star Wars journey” when compared to the first two movies in the trilogy. It’s not entirely clear what that means, but she discusses how the strange connection between her and Adam Driver’s Kylo Ren/Ben Solo will be explored further in the film. While it seemed like it might have been fully mined after The Last Jedi, Ridley assures the viewer that they’ve “mined it some more.”

Director J.J. Abrams discusses the difficulties of making the film, and how his wife Katie McGrath encouraged him to take the job because his nervousness about returning meant that he would do a good job. “The job of this one is to bring to a close three trilogies,” he says. “It’s an end to nine movies.” He also believes that the film needs to stand on its own, though, even if you haven’t seen the first eight. He says that this film is “a little less safe” than The Force Awakens was.

Oscar Issac, who plays Poe Dameron, says that his character has “a bit more to do” in this film than in previous entries. He also says that this one is about a “trio” of characters (Rey, Finn, and Poe,) much as the original trilogy was about Luke, Leia, and Han. This is an interesting comment, as Poe and Rey did not meet until the very end of The Last Jedi. He also talks about how we’ll find out more about where Poe came from in this film. “We get to find out that Poe’s got a bit of a past that he’s also been running from,” he says. Keri Russell’s character, Zorii Bliss, is a figure from Poe’s past, and Russell describes her character as “shady.” Issac adds: “The last time they saw each other, things may not have been left on the best of terms.”

John Boyega briefly touches on what’s different about Finn in this entry, saying that he’s a more mature character now, and he’s finally worked out what his place in everything is. Boyega says that he was worried that there would not be room in the film to show Finn’s development, but that this was not the case. “Finn is now a fully-fledged, 100% committed resistance fighter,” he says, “and has no fear whatsoever.”

Anthony Daniels, who has played C-3PO since the original 1977 movie, says that “so many of the cast get to do things they’ve never done before,” and talks about his character’s extended part. “C-3PO has been kind of absent for the last two movies, scenery on the mantlepiece…he’s back.” He says that he was not given the script until 2-3 days before filming, and that people kept telling him that he had a great role this time around. He describes the script as “magical” this time around, while also suggesting that it might be the final time he gets to play the character on screen, as he suspects that “the story closes here.”

Elsewhere in the video, new Chewbacca Joonas Suotamo discusses how the late Peter Mayhew came up to him after the release of Solo to tell him that he’d done a good job, and that the character was in safe hands now. Billy Dee Williams is emphatic about what a pleasure it was to work with J.J. Abrams–the whole cast has good things to say about him, but Williams calls working with him “one of the most extraordinary moments of my career.”

The video ends with an exclusive interview with R2D2, which, yes, is just a series of beeps and boops.

The first clip from Star Wars: The Rise of Skywalker was recently released, and is worth checking out. The final movie will run for 141 minutes.