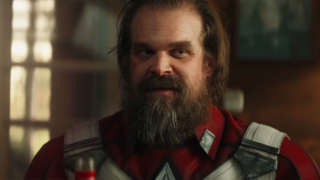 The first trailer for Marvel’s upcoming Black Widow has arrived, and it looks fantastic. Scarlett Johansson is set to reprise her role as Natasha Romanoff, but there are several new high-profile additions to the Marvel universe. These include Florence Pugh, who plays another Black Widow named Yelena Belova, and Stranger Things star David Harbour, as Red Guardian. But who, exactly, is he? Why does he matter in Natasha’s story and, more importantly, what will his introduction mean for the MCU?

The answer to these questions are, unsurprisingly, pretty complicated, given Natasha’s strange comic book past as well as her current position within the MCU, and how both of those things play into real-world history. Let’s break it down.

Originally introduced back in the early 1960s, the second Red Guardian, known in his civilian life as Alexei Shoskatov was, unsurprisingly, a pretty stereotypical product of the Cold War era in superhero comics. Marvel, specifically, was heavily reliant on current events to bring a sense of realism to their stories, so themes that revolved around a cartoonishly overblown Russian threat to the American Way were more than just commonplace, they were Marvel staples–especially where Natasha, the Avengers own Russian femme fatale, was concerned.

Of course, it’s important to remember that in the 1960s, virtually everything about Natasha, from her origin story to her character design, would be basically unrecognizable to modern fans. This was before the concept of the Red Room had been introduced and the idea that Natasha was anything more than a somewhat duplicitous Russian spy who worked for SHIELD and that the mantle of Black Widow was anything more than an arbitrary code name was still a long, long ways off.

Using what little backstory Nat had in those early days as a very loose framework, it was explained that Alexei was a famous Soviet World War II hero who had married Nat during her very successful ballet career in the USSR. However, not long after their marriage, and as the Cold War began to roll in earnest, the KGB decided that Alexei’s skills as a soldier were too useful to waste. He was sent out on a mission where he was forced to fake his own death and sever all contact with his private life so that he could dedicate himself to becoming a symbol of Soviet power and prosperity as Red Guardian, similar to the way Captain America functioned as a symbol for the USA.

Naturally, Natasha was predictably distraught to hear that her husband had “died,” and in this early version of her origin, her mourning actually inspired her to join the KGB as well, to train as a spy–which is how she became Black Widow. You know, like you do.

All told, Alexei’s early days in Marvel lasted a scant two issues before he was defeated by Captain America and “died” under a heap of molten lava. In the years following his death, he became a sort of staple of Natasha’s ever-shifting backstory as she mourned for her late husband. Despite the fact that he went out a villain, she still believed him to be a good person at the core.

He came back a few times–both as a faux-zombie (don’t ask) and as a life-model decoy robot, or LMD, before being officially resurrected in the early 2000s. By then, however, Natasha’s origin story and circumstances had drastically changed into something we’d consider more familiar, so the story of a fake-dead KGB brainwashed husband didn’t quite land the way it did back in the 1960s.

With the emotional stakes of his story significantly downgraded, Alexei was largely downgraded to C or D list villain after that, taking on the mantle of Ronin for a time and working as an ultimately forgettable villain for Natasha to fight every now and again. The fact that he’s still, technically and despite all the origin story changes, Natasha’s ex-husband rarely comes up.

So, he’s a super soldier?

It’s tempting, given the Captain America comparisons, to assume that Alexei had his own knock-off version of the super soldier serum we associate with Steve Rogers–but that’s actually not the case. Alexei’s origin took place in an era of Marvel before Steve Rogers was given the backstory we now consider ubiquitous with him–back in the 60s, Steve was just a regular guy who got very strong the regular way. That was the case with Alexei as well–no powers, no healing factor, no abilities outside what the Marvel Universe considered “standard” for human superheroes.

What Alexei did have, however, was his own answer to Cap’s shield. Sort of. He wore a circular, magnetized belt buckle that he could throw and have return to him.

No, really. That was his main weapon.

Alexei never actually got the origin story overhaul that Steve did–he had long since faded into relative obscurity by the time the idea of the serum had really crystalized into Steve’s history–so even in his more modern appearances, he remains just a very fit but ultimately totally normal guy.

Other characters to take on the Red Guardian name in Alexei’s wake got less ridiculous weapons, including their own full-size Captain America style shields (usually solid red with a white star) and powers that were more in line with Steve’s modern incarnation.

How will this work in the MCU?

That’s the real question. It’s difficult, given just how much the MCU has modified or otherwise updated Natasha’s story, to see just how a relic of her oldest comic book past will fit into the puzzle. It’s unlikely that their marriage will cross over, given the way MCU Natasha has canonically been trained in the Red Room since birth–though her time between the Red Room and joining SHIELD remains mysterious, so maybe there was time for a brief affair in there somewhere.

Also, given how the timeline of events works in the MCU, and the fact that Alexei has never been known to be frozen, cryogenically or otherwise, it seems very likely that the World War II components of his past are going to be modified. David Harbour is 44-years-old, so it would be tricky to justify him as a vet of any Cold War-era conflicts, much less a hero of the USSR. However, there’s plenty of cryo-tech laying around the MCU–just ask Bucky Barnes–so maybe he’ll be getting a major update to his backstory that way, rather than a proper modernization.

In fact, given how the MCU incarnation of Steve Rogers features the super serum so prevalently, and how organizations like Hydra were definitely trying to duplicate it during the 1940s, it’s totally possible the live-action version of Alexei could be more of a Captain America clone than ever before, borrowing more from the other Red Guardians in Marvel history rather than Alexei himself. That could certainly make things interesting.