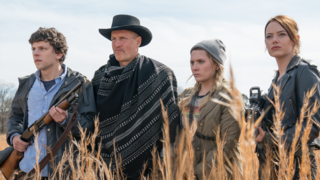 It may be trendy right now to act like the zombie genre is on its way out, but that’s not how the creators of Zombieland see it. They view zombie movies and TV shows not as a passing fad, but as their own category that will be around “forever,” according to Zombieland Double Tap co-writers Paul Wernick and Rhett Reese, who also wrote the original.

“It’s the ebb and flow,” agreed Reese. “You have a couple of things come out that fail or whatever, and then all of a sudden it’s cold, and then something heats up again, and now it’s hot. It’s silly. I mean, ultimately, we’re going to have zombie movies forever.”

The original Zombieland, a unique blend of the zombie and comedy genres, came out a full decade ago, in 2009–a time when the landscape of zombie entertainment looked a lot different. At the time, doing a lighter take on the undead felt fresh (paradoxically, given the subject matter)–but there have been countless imitators and contemporaries, from iZombie to Anna and the Apocalypse, since then.

“I think more than anything, we just fell back on our characters and our comedy and thought, ‘Well if zombies are stale for whatever reason, if that’s played out, we’re OK, because really, this is a movie about people,'” Reese said.

Zombieland 2 is certainly more of a comedy than a zombie film. Like the original, the sequel sidesteps many of the tropes of apocalyptic survival fiction–the characters are seldom in any real danger, and implausibly, they’re never short on resources like food and fuel. The question isn’t where their next meal will come from, but whether they’ll be able to sate Tallahassee’s Twinkies craving.

But there are small nods here and there throughout the sequel to the fact that these characters are living in a post-society world. For example, Columbus mentions in his voiceover that it’s getting harder and harder to find working vehicles–a line the writers added in order to explain why Tallahassee spends the whole movie in search of a badass car. In that way, Zombieland is usually only realistic when realism serves the comedy in some way, the writers explained.

“We wanted to do that to make it feel realistic, but to us, it’s more about story. So we had the idea, what if Tallahassee is sort of cursed with crappy cars, when he wants a good car? But then we had to back up, because our producer was like, ‘Well, he could have any car he wants,'” Reese said. “So we had to explain that…It was sort of the combination of, we want to do something funny, but now we have to make sure we ground it and make it feel real.”

At another point, a character casually mentions that there’s still electricity because the nation’s power-generating dams are still running off natural rainfall. That may seem like a stretch, but Zombieland 1 and 2 director Ruben Fleischer told GameSpot that it’s actually fairly realistic. He said they used references like Alan Weisman’s book The World Without Us and the History Channel series Life After People to determine the state of Zombieland’s world at this point.

However, Fleischer admitted that they didn’t spend much time referencing other zombie fiction from the intervening decade between Zombieland 1 and 2. In fact, the director is “not a big consumer of zombie stuff” in general, as he put it.

The exception is the movie’s final big action scene, which was inspired by World War Z–so expect a giant pack of zombies flowing over the landscape like a wave of rotting destruction.

Zombieland’s writers did feel some pressure to change up the formula, they admitted–which is why Double Tap’s zombies have evolved into different varieties, like the easily distracted Homers and the tougher-than-normal T-800s.

The writer described one variety of zombie that didn’t make it into the final film: the Weeble. “You know how those old toys, the Weeble, they wobble but they don’t fall down–they always pop back up. So it’s, he’s back up again, it’s a Weeble!”

The Weeble may have fallen over and been cut from the movie in the end, but there’s plenty left in Zombieland Double Tap to recommend it to fans of the series and of the zombie genre in general. Just don’t say zombie movies are going out of style.

Zombieland Double Tap hits theaters Friday, October 18. In the meantime, we revisited the original Zombieland recently–check out the 30 Easter eggs, references, and fun facts you might have missed in the original.