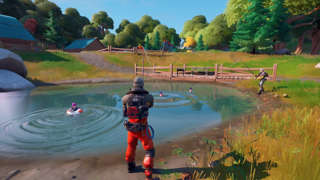 Fortnite Chapter 2 Adds Fishing: How To Fish And What You Can Catch

Fortnite
Follow
Get the latest news and videos for this game daily, no spam, no fuss.
You’re Good to Go!
Collapse

After a brief wait, Fortnite has finally emerged from the never-ending opaque nothingness of the black hole, launching the game into the first season of its second chapter. Fortnite Chapter 2 introduces several additions, which includes a brand-new battle pass packed with content. However, the headliner of Chapter 2, is the new map, which offers new ways to play Epic’s battle royale–including fishing.

If you and your squad are looking to catch some fish, you’ll first need a fishing rod. If you’re with a squad, the easiest way to find enough fishing rods for everyone is to head towards the beach or lake-like locations on the map and look for barrels. They’ll typically hold three or four rods. You can also find individual fishing rods in chests or via floor spawns–both of which are random drops so neither is ideal if you want to fish.

Once you have your rod, you just need a body of water. Anywhere will do, but if you want the best rewards, look for points on the water where there’s a collection of bubbles–those signal a location where there’s a good catch. Cast out and you’ll catch one of at least four items: a bundle of materials, a random weapon, a Flopper, or a Slurpfish.

Most of the weapons caught with the fishing rod so far seem to be Epic rarity, but we haven’t confirmed if you can catch much rarer prizes. The two fish can be used as healing items. The Flopper heals about as much as a bandage. The Slurpfish heals a lot more, restoring 50 points to both health and shields. Both fish take about the same amount of time to use, so you ideally want to replace any Floppers you catch with a Slurpfish.

You can get more out of fishing than items to use in a match though, as participating in the activity is one of the many new ways to advance in Fortnite Chapter 2, Season 1’s battle pass.