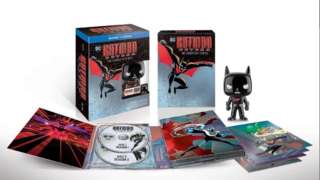 The products discussed here were independently chosen by our editors. GameSpot may get a share of the revenue if you buy anything featured on our site.

The remastered release of Batman Beyond is almost here, and right now you can save $30 on your pre-order. Releasing October 29 on Blu-ray for the first time, the Batman Beyond limited-edition box set is down to $69.96 (was $100) at Amazon and Walmart. The re-release of one of the greatest animated superhero shows is a 20th anniversary celebration of sorts.

In addition to the TV run and full-length movie, this edition contains a bonus disc with 15 featurettes, two of which were created specifically for the re-release: “Knight Immortal” and “Nostalgic Tomorrow — A Batman Gathering.”

Because of Amazon’s pre-order guarantee, if the price should drop again between when you place your order and the item ships, you’ll only be charged the lowest amount.

Batman Beyond: The Complete Series

As a numbered, limited-edition set, you’ll also get some neat collectibles with your pre-order. If you’re into Funko Pops, the box set comes with an exclusive metallic Funko of the Caped Crusader. The four lenticular art cards make this set even more enticing for collectors.

The re-release comes at a very fitting time. The pilot episode of Batman Beyond actually starts in 2019, before quickly skipping forward 20 years. The elderly Bruce Wayne soon becomes a mentor to a new, teenage Batman in Neo-Gotham, a futuristic version of Gotham. When it comes to Batman, there’s nothing quite like Batman Beyond. Whether you’re looking to check off a Batman fan on your shopping list or you’re simply nostalgic for the sci-fi stylings of Neo-Gotham, this Batman Beyond box set isn’t likely to disappoint.