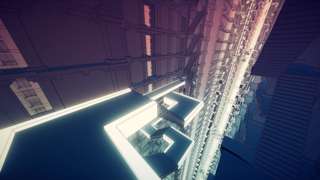 Apple Arcade Gets Another Cool-Looking Game This Week

Manifold Garden
Follow
Get the latest news and videos for this game daily, no spam, no fuss.
You’re Good to Go!
Collapse

William Chyr Studio has announced that Manifold Garden–first revealed as Relativity back in November 2012–is finally releasing this week. The game will be launching on The Epic Games Store and Apple Arcade on October 18, before following on Steam in 2020.

Manifold Garden is a first-person puzzle game that’s set in a seemingly infinite, physics-defying artistic space. Like several previous first-person, 3D puzzle games–such as The Witness–you must solve environmental puzzles within Manifold Garden’s world in order to proceed in it. The trick to solving many of the puzzles, however, lies in how you use the in-game gravity to your advantage.

You might see a ledge you cannot reach, for example, but jumping off the side of the world will cause you to fall until you come back around and land on the ledge. Placing blocks in certain locations will adjust the shape or gravitational pull of specific spots as well. It’s a lot easier to see how it all works in action. You should watch the gameplay trailer embedded above for a better idea. Full warning though; it’s sometimes really trippy, vertigo-inducing, or both.

Apple Arcade has been on a roll since launch, delivering an expanding library of well-crafted indie games for a fraction of their total retail price. Just last week, the games subscription service got two spooky-looking additions in the form of Inmost and Stela, both of which seem intriguing in how well they use their environments and music to craft unsettlingly creepy experiences. But even before both were added to the service, plenty of Apple Arcade games caught our eye.

If you’re looking for more detailed recommendations, we’ve reviewed and written impressions for a few Apple Arcade games already. Those articles are listed below.