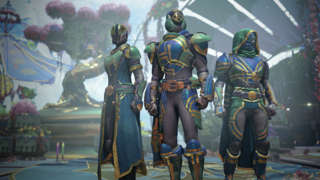 Destiny 2 Servers Will Be Offline On October 3; Here’s Exactly When And For How Long

Destiny 2
Follow
Get the latest news and videos for this game daily, no spam, no fuss.
You’re Good to Go!
Collapse

Destiny 2 will be offline on October 3 as developer Bungie performs maintenance on the multiplayer game’s servers. The downtime will commence at 8 AM PT / 11 AM ET / 3 PM GMT, and during this time the game will be unplayable, while some functionality on Destiny’s connected experiences across web, mobile, and third-party apps may be interrupted.

The downtime is expected to run for 30 minutes, wrapping up at 8:30 AM PT / 11:30 AM ET / 3:30 PM GMT. While the servers are expected to be back online at that time, players might experience a server queue. This is nothing out of the ordinary, as many online games implement server queues at various times to help ease the strain of server load.

Destiny 2’s big new expansion, Shadowkeep, and the New Light free-to-play version of the game, released on October 1. The rollout wasn’t entirely smooth, as Bungie was forced to bring down the game’s servers for several hours to perform “emergency maintenance.”

Despite the hiccups, Destiny 2 was able to reach more than 200,000 peak concurrent players on launch day. The game continues to be extremely popular. Steam’s public statistics page shows the game reached 226,000 concurrent players on October 2, making it one of the most popular games on the whole of Steam.

For lots more on Destiny 2, check out GameSpot’s recent stories below: