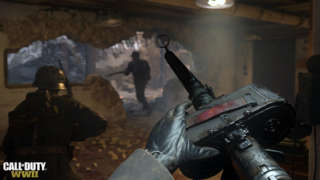 Call of Duty: Advanced Warfare
Follow
Get the latest news and videos for this game daily, no spam, no fuss.
You’re Good to Go!
Collapse

Sledgehammer Games, which made Call of Duty: World War II most recently and is said to be part of a big development shakeup at Activision, has opened a new office. The California-based studio’s new branch is based in Melbourne, Australia.

Hey heeeeey, look what I was allowed to announce at my #NZGDC19 talk, and now on social media!
You’re looking at the first official hire at @SHGames Melbourne! I am so excited to say I will be starting there as a producer on Monday, and helping to grow our studio in my new home. pic.twitter.com/p6e5E6aFma

It is unknown what Sledgehammer’s Melbourne office will work on. The main studio was founded in 2009 by Dead Space developers Glen Schofield and Michael Condrey, both of whom have since left the company. Sledgehammer, which is owned by Activision, co-developed 2011’s Call of Duty: Modern Warfare 3 with Infinity Ward as its first title, before making Call of Duty: Advanced Warfare (2014) and then Call of Duty: WWII (2017).

The Call of Duty series was known to be on a three-year, three-studio cycle, but this appears to be changing. According to Kotaku, Activision originally planned for 2020’s Call of Duty game to be led by Raven Software with Sledgehammer assigned as a co-developer on a title said to be set during the Cold War. However, Activision reportedly changed plans and decided to put Treyarch on Call of Duty: Black Ops 5, said to release in 2020.

According to the report, Raven and Sledgehammer will work on Black Ops 5 as support studios. They will reportedly take what they already made for their own single-player campaigns, and adapt them for Black Ops 5, which is also said to take place during the Cold War.

The announcement of Sledgehammer’s Australian studio comes just a month before PAX Australia comes to Melbourne in October.

Sledgehammer appears to be the first, or among the first, of Activision’s Call of Duty studios to open a sister location. It’s a win for the Australian game development scene, as Sledgehammer will be looking to hire staff. Earlier this year, Electronic Arts announced massive layoffs for its own Melbourne studio, FireMonkeys.

A job posting for Sledgehammer Melbourne that has since expired called for a software engineer to join the team. The job ad states that Sledgehammer Melbourne is a “start up studio.” The ad also describes the studio as a “small but mighty team,” which suggests it won’t staff up to the level of Sledgehammer’s main office in California that reportedly counts more than 200 on its staff.

The next Call of Duty game is the Modern Warfare reboot from Infinity Ward. It launches on October 25 for PlayStation 4, Xbox One, and PC.