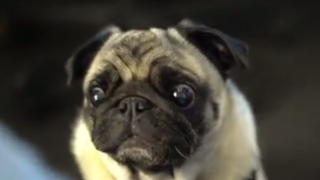 Halo Infinite
Follow
Get the latest news and videos for this game daily, no spam, no fuss.
You’re Good to Go!
Collapse

343 Industries has released new videos that show how the audio team captured some of sounds in the upcoming Xbox One and PC game Halo Infinite. The videos are fantastic and offer an illuminating look into the way sounds for creatures, weapons, and vehicles are captured.

The star of the show is Gyoza. That’s the little pug that 343 brought into the studio to sniff and scruff and make all kinds of guttural noises. We can only imagine what these noises will be turned into in Halo Infinite. “Meet our favorite pug, Gyoza,” reads a post from 343 on Instagram. The best friend of our studio’s Technical Art Director, his grunts, breaths, and excitement are sure to make for some… interesting sounds in Halo Infinite.”

The videos, which originally date back to August and were reposted on YouTube by AI, also show the team firing all kinds of weapons, including high-power automatic rifles and shotguns. Additionally, we get a peek at some of the stranger sounds made with various torches, buckets, and baking pans.

Halo Infinite releases in Holiday 2020 as a launch title for Microsoft’s next-generation console, Scarlett. The game will also be playable on Xbox One.

A beta for Halo Infinite will be held prior to launch through a “flighting” program. In other news, 343 described Halo Infinite’s microtransactions as a “AAA player investment experience,” while Halo Infinite’s creative director left 343 in August.