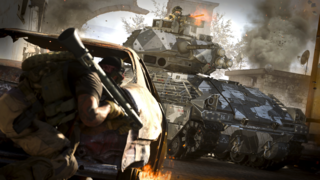 Modern Warfare: PS4 Players Will Have A “Day One Advantage”

Call of Duty: Modern Warfare
Follow
Get the latest news and videos for this game daily, no spam, no fuss.
You’re Good to Go!
Collapse

Although “most” of Call of Duty: Modern Warfare‘s post-release DLC will launch on all platforms at the same time, Sony’s exclusivity deal with Activision is continuing in some form. Activision has confirmed that PS4 players “will have an exciting Day 1 advantage” in Modern Warfare. That’s all Activision had to say on the matter, so fans can only guess for now what that may mean.

Activision and Sony have had an exclusivity deal for Call of Duty for years now, with new content releasing first on PlayStation. That’s changing somewhat this year, as “most” of the game’s after-launch content will be available on all systems simultaneously as part of developer Infinity Ward’s intention to keep the playerbase connected. This is especially important now, apparently, because Modern Warfare supports cross-play between competing consoles and PC.

Here is Activision’s full statement on its partnership with Sony for Call of Duty content:

“Call of Duty is excited to continue its partnership with PlayStation, including last weekend’s PS4 debut of the Modern Warfare Open Beta as well as the recent PS4 exclusive 2v2 Alpha. But the best is yet to come. For the very first time in our partnership with PlayStation, PS4 players will have an exciting Day 1 advantage. More details on how Call of Duty will continue to support PlayStation as the best place to play Modern Warfare will be rolled out soon.”

Activision will test the cross-play functionality with the next Modern Warfare beta that begins this weekend. Modern Warfare launches on October 25 for PS4, Xbox One, and PC.