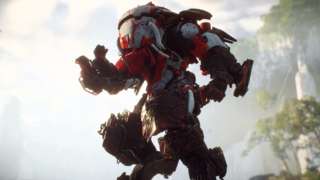 Anthem
Follow
Get the latest news and videos for this game daily, no spam, no fuss.
You’re Good to Go!
Collapse

Anthem is changing up how it releases future content. Developer BioWare has confirmed that it is ditching the previously announced “Acts” release schedule in favor of seasonal updates.

As described before Anthem’s release in February, BioWare planned for the game’s Acts to introduce new locations and features that roll out over time. The latest of these Acts culminated in the Cataclysm event that’s going on now. It’s coming to an end soon, and BioWare is now telling fans to expect seasonal updates in the future. BioWare’s Chad Robertson explained that BioWare is moving to this structure so that it can address some of the “core issues” people are experiencing.

“We hear your concerns on core issues in Anthem and are acting on it,” he said. “Those systems require a more thorough review and re-working versus quick fixes. We’ve got a team working on that now, and early results are promising. In order to address these long-range plans, we are moving away from the Acts structure for updates. Instead, we have additional seasonal updates planned for this year that we think players will enjoy.”

“These events will deliver challenges and chases similar to what you’ve seen, and are built around some fun themes we’re bringing to the game.”

Robertson said BioWare is making this disclosure as part of its effort to be more transparent and honest with fans about the work that’s required to “make Anthem better.”

“We also want to ensure we’re backing up our words with a great game you can play,” Robertson said. “So I don’t have any news today to share about the long-term changes we are bringing to Anthem. What I can say is that we will continue to engage with you, our community, through PTS when we can show you what is coming.”

Anthem is the 5th best-selling game of 2019 so far in the United States, according to NPD. It only trails The Division 2, Madden NFL 20, Kingdom Hearts III, and Mortal Kombat 11.

Presumably in a bid to get more people playing it, EA added Anthem to the free game catalog on EA Access and Origin Access earlier this month. The game’s lead producer, Ben Irving, left the team in August. Upon his exit, he said he believed Anthem has a bright future ahead of it.